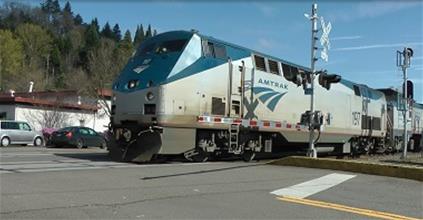 In November 2015, the Eugene Public Works Department convened an 11 member stake holder group to provide input on the proposed creation of a railroad quiet zone (RRQZ) in the north downtown and Whiteaker areas of Eugene. The charge of the RRQZ Citizen Advisory Panel is to review various safety measures required for the City of Eugene to apply for designation as a train-horn quiet zone. The group is also considering options for funding the safety measures.

Over the course of six meetings, the group developed preliminary recommendations for safety measures at 10 crossings:

Total estimated cost of the preliminary recommended safety measures ranges between $6,835,000 and $7,350,000. Options for funding these costs are outlined in a  financial strategies memo to the citizen panel.

In addition to establishing a train horn quiet zone in the Whiteaker and downtown areas, Eugene is working on several related railroad projects: relocating the rail crossing on Eighth Avenue near Hilyard Street; and supporting a new Amtrak siding west of Willamette Street. Each project has its unique requirements and objectives, but each project impinges on the others: